Current research activity in the Uludag Lab is comprised of two avenues of explorations, one focused on gene delivery for bone regeneration, and the other on cancer therapy by siRNA. There is a significant overlap in working paradigms of these research themes, and the activity in each area strongly complements the other research avenue. Our core expertise remains the synthesis of functional materials for modulation of cellular responses for a beneficial therapeutic outcome.

Extensive efforts by academic and industrial groups are yielding new and exciting proteins to enable bone repair. BMPs, for example, have been produced in large quantities by recombinant means and clinically employed for fracture healing.

A better understanding of the protein delivery challenges, in particular controlling the local concentration of the proteins, has been paramount in developing these new agents for clinical use. To develop next-generation therapeutic agents, we want to rely on the genes of these stimulatory factors for bone regeneration, rather than the proteins artificially produced outside the body. In sit expression of the desired genes promises a more physiological approach to control tissue regeneration and wound healing.

The critical challenge is to enable robust gene expression at the site of repair, so that the locally produced proteins can stimulate more effective bone healing`. We are creating new biomaterials for this end, whose goal to package the genes into supramolecular assemblies and present the genes to cells in the body. The details of our research could be found on the publications page of the web site. 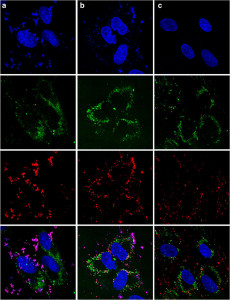 Cancer arises from uncontrolled cell proliferation due to aberrant expression of select set of proteins, resulting in a loss of control over the normal cellular physiology. Most conventional cancer drugs do not target these changes in the cells, but rather aim to curb uncontrolled cell proliferation non-specifically. A permanent solution to uncontrolled cell proliferation is to target those proteins with aberrant expression and silence the mediators responsible for this effect. The newly discovered silencer RNA molecules are ideal agents for this purpose. They can be designed to target any protein at will and they can form an effective platform to target multiple aberrant proteins simultaneously. Their delivery into the cells, however, is problematic. The highly charged silencer RNA (known as short interfering RNA, siRNA) cannot cross cell membrane on its own and it gets quickly degraded in the body if left in free form.

Our goal is to design ‘nano’-engineered vesicles, based on architecturally-controlled polymers, to facilitate cellular uptake of siRNA and protect it from degradation. We are particularly interested in amphiphilic polymers composed of cationic groups and lipophilic groups, since these features provide an optimal balance between packaging of siRNA into nano-vesicles and cellular penetration. In addition, we plan to add bioactive moieties onto the vesicles that can impart cell-selectivity to our delivery systems, so that cancerous cells are targeted in the body, rather than the normal, healthy cells. More information about our siRNA research can be found in our publications available in the Publications page.